I started a Latin course from The Great Courses last night. I want to be able to read St. Jerome’s Vulgate. I’m too tired to tell you why … because I spent today playing paintball with my 12-year-old son at (shouted in over-the-top monster-truck-show voice) XTREME PAINTBALL!!!

This place was really cool. It has six different fields of varying terrain (including hills and woods) and lots of hiding places. They were very serious about safety, and I appreciate that. They also want to make sure everyone has fun, so they split up the 40 people who showed up this afternoon into two groups that were evenly distributed by experience. Ages today ranged from 10 to 40-something, with teenaged boys representing the largest sample. (Surprise!)

We played different team games, generally variations on capture the flag. I managed to keep going for more than three hours before dropping out. Turns out that running and crouching with a 5-pound gun for three hours is kind of exhausting.

If you’re in the Austin area and looking for a fun, family-friendly place to do some paintball, check Xtreme Paintball out. 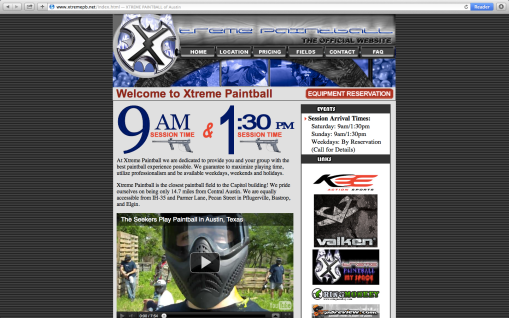