I Think a Change Would Do Me Good

The moon is high in the western sky. It’s been out in the daytime the last couple of days, and as I look at it I keep noticing that the dark spot has a familiar curve to it. It looks like this: 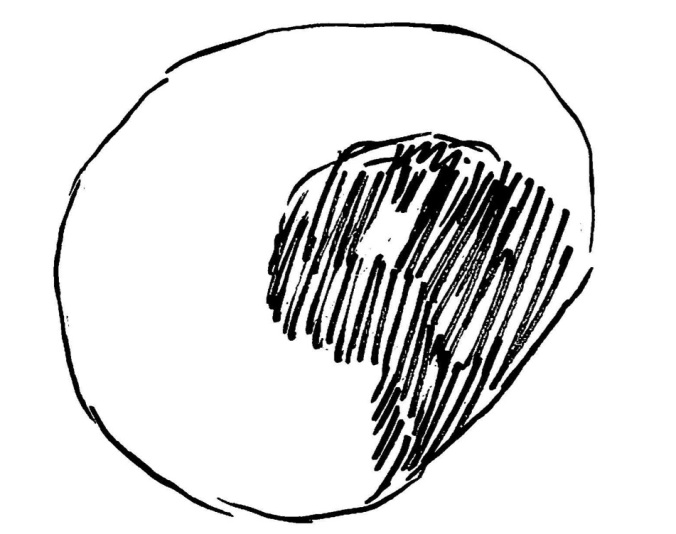 I’ve been wondering if it’s from the moon that the Chinese got their yin yang. The moon is light in darkness and is itself a mixture of darkness and light.

This is the kind of silly stuff I think up when I’m in a philosophical mood.

This morning I finished reading Holy Cow: An Indian Adventure by Sarah MacDonald. It was the October selection for the book club whose members graciously allowed me to join them recently.

Yes, I realize it is now November. I have not been a very useful member of the club so far. I promise to be more diligent about the next reading.

Sarah MacDonald is an Australian who was sort of an accidental traveler to India. After doing a long-distance relationship with her boyfriend, a foreign correspondent for the Australian Broadcasting Company, she gave up her own journalism career in the name of love and followed him to India for two years. Without a job (and often without the traveling boyfriend) she used her time there to travel the country and learn about its religions. MacDonald was/is an atheist who was looking for enlightenment.

If I counted correctly, MacDonald explored ten different religions in India, among them Buddhism, Hinduism, Judaism and Islam. She is culturally a Christian and her ancestors are Christians, but she rejects Christianity. Near the end of her journey, however, she decides to give Christianity the same chance she’s given the other religions, and for a short while she genuinely enjoys herself.

The Indian reinterpretation of Christianity has made the Jesus and Mary gang more attractive to me… Here in Velangani, Christianity is at its best—sharing, ritualistic, democratic, forgiving and female. Seeing half a million people visit a large porcelain doll in a sari [the Virgin Mary] is strangely uplifting. Perhaps Christianity has got something to give the world apart from Easter eggs, the Osmonds and guilt. For the first time I see the faith, divinity and goodness in the faith of my forefathers.

MacDonald’s feelings are short-lived. It is September 2001, and the morning of the 12th she is given a newspaper with a picture of the twin towers burning in New York.

As we read, rigid and silent, I feel the return of familiar cynicism and a new depth of hopelessness. I take off the plastic Virgin Mary necklace I’d bought as a tribute to my new respect for Christianity, feeling foolish for wearing the trinket and believing in goodness. My flimsy faith was too small and too weak to withstand this battering.

Weeks later, when MacDonald and her now-husband return to Australia, she feels different, thanks to India. She says she is “reborn as a better person, less reliant on others for my happiness and full of a desire to replace anger with love.” And then she thanks nine religions for her transformation, attributing things she has learned to each. She does not thank or acknowledge Christianity.

Why do I think this is significant?

Here is a person who embarked on a journey with the purpose of learning and changing herself, of opening herself up to new experience. At the end she believes she has changed.

But I don’t think she has changed, not fundamentally. MacDonald is willing to accept that the adherents of world religions other than Christianity are imperfect without turning around and rejecting the validity of those religions. But she starts the journey thinking that Christianity alone is invalid as a belief system and ends it thinking the same thing, and that leads me to my philosophical question:

Are we capable of true change? Or is everything we learn simply a veneer over an immutable substructure?

I ask this because the purpose of my reading and philosophizing is to change myself into a better person. And now I read MacDonald and I wonder if two years from now I’ll think exactly the same way as I do now. If I do, will I actually be a better person? Will there have been any point to the journey?

I get the feeling that somehow I’m going about this in the wrong way. I’ve been reading secular things and avoiding religious thinking. I’ve been compartmentalizing things, keeping church and state (of mind) separate. I’ve been approaching philosophy from an agnostic mindset, unwilling to break down the barrier holding back faith. MacDonald never broke that barrier herself, and she didn’t change. They say faith can move mountains. Will I let it move me?

The Dalai Lama has given me something to think about:

“Some will be drawn to Buddhism, but I really think it’s best that you try and find truth in the religion of your forebears and ancestors. It is very hard to change religion. I think it’s safer not to.”