I *love* reading to my kids. We read intermittently over the summer, but I’ve decided to do nightly reading now that school has started. We wait until Dad is home and read as a family.

He plays Angry Birds on his iPhone and listens. Or surfs Craigslist for Corvettes. And listens.

He can multitask. I’m bad at that. I can’t even listen to the radio while I drive.

Reading to the kids used to bore the heck out of me until several years ago when I got smart enough to dump the repetitive picture books and pick up children’s novels instead. I do very theatrical readings, which is ironic because I always sucked at theater. (Is that ironic in the Alanis Morissette sense or in the literary sense? I always get those confused.)

Children’s novels are a good fit for my style. They’re generally not very subtle. Over-emoting is encouraged.

Here’s the weird thing, though: after interpreting characters on the fly for years (I never read ahead because then it would be boring) I’m becoming good at it.

I’ve had my challenges this summer. Make up melodies for the written lyrics that Pa plays on his fiddle in Little House? No problem. Alternate between a male American narrator and a female British narrator in Rick Riordan’s The Red Pyramid? Nailed it. Keep 20-odd characters in that novel straight,  including accents from the American South, the Middle East, Germany, France, and Russia? Exhausting, but done. And trust me, if I miss one, the kids call me on it.

We’re reading this one now, a book I picked up purely because of its cover: 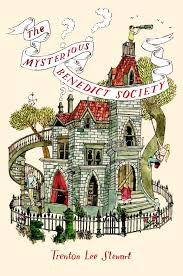 I’m a sucker for any children’s book that reminds me of Edward Gorey, the brilliant 20th century Gothic illustrator. This one has the added benefit of being a puzzle book, á la The Westing Game, a childhood favorite of mine.

It’s so much fun. We’re three chapters in, and we’ve got a mysterious and quirky puzzle plot that has all four of us guessing, plus five distinct characters to voice so far. (Sticky Washington is my favorite to voice — my version of him has a slight Spanish accent that’s soft and lilting and makes every statement into a question.)

The kids hang on my every word, and even though I know it’s the story that rivets them I feel like I’m a part of it too. I get to inject my own creativity into each book. That’s really gratifying.

One thing I’m learning as an aspiring writer: reading aloud exposes bad dialogue very quickly. Luckily we’re not having that problem with this novel.