Today I stumbled across this fascinating old article from the Washington Post about virtuoso violinist Joshua Bell:

A reporter challenged him to play in a Metro station as a street musician to see what would happen. Would commuters on their way to work recognize the transcendent beauty of his playing, or would they hurry on by?

As a former commuter to work, I suspected I knew what would happen. The one and only time I stopped on my way to work in six years was when I saw a pedestrian get hit by a car. A marching band followed by a parade of elephants wouldn’t have slowed me; I was never an early arrival with time to spare.

Some folks worried beforehand that L’Enfant Plaza would have a crowd control problem on its hands with Bell playing, but out of nearly 1,100 commuters that passed by him in the 43 minutes he played, only one recognized him. And a crowd never gathered.

It’s been theorized that beauty is contextual, and I can agree with that. A sunrise when you’re running late getting the kids to school is nowhere close to as lovely as one that arrives after you’ve spent the night in restless sleep wishing the day would come. Especially if that restless sleep is a result of nightmares about evil, supernatural nocturnal creatures coming after you.

I have weird dreams. But that’s beside the point.

I think being in the right frame of mind for beauty is important. As a museum curator in the article pointed out, it’s easier to appreciate a great painting in a museum than to appreciate the same painting reframed and stuck in a coffeehouse with a $150 price tag slapped on it.

But I think that’s only part of the problem. Another part is recognition by others. I think we have so many stimuli coming our way that one way we filter them and decide to stop and pay attention is if other people are already paying attention. Who looks at the sky unless someone is pointing?

Think about paintings again. What painting commands the most attention and respect in the world?

It’s a great painting, sure, but the personal experience is far from transcendent. It’s just you and 100 jostling other people behind a velvet rope 10 feet back looking at a painting through bulletproof glass. But people want to see it because they know it because everyone talks about it.

My favorite paintings are at the Prado in Madrid. But again, this is not original. I was primed for them because at 19 I desperately wanted to go to Europe and I had taken art history and my best friend in childhood had a copy of Velazquez’s Las Meninas hanging in her house. And they’re in an art museum, not a coffeeshop. 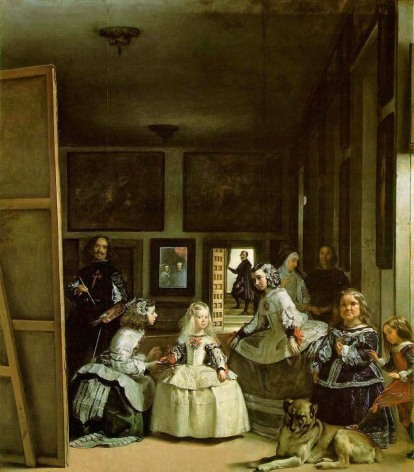 I also like this one in the Prado by Goya, Saturn Devouring His Son:

Did I mention the nightmares?

Going back to the subway station, if no one else were stopping to listen, would the music penetrate your consciousness to the point that you’d stop, especially if you were in a hurry?

I’d bet not. But if a huge crowd were gathered, you’d probably stop to look and ask people what was going on. And when they told you a famous musician was playing, you might stick around.

It’s an interesting article, and has video attached. Check it out.

The Big M reminds me that another reason that people aren’t stopping is that it’s uncomfortable to stand close to street musicians, who are just on the edge of panhandling. If it’s just you, you feel weird. If you’re part of a crowd, you don’t. Case in point: note that the only person who stood front and center to watch Bell was a woman who recognized him and knew he wasn’t really a street performer. Even the man who recognized his talent (if not him) and was enthralled by it stood away against a pillar out of the direct line of sight. When he had to get to work, he snuck in to drop money in the violin case and scurried away again as quickly as he could.