The Big M was cleaning out his beloved garage and found this in my stacks of stuff:

It’s the Austin phone book from 1939, the year my mother’s parents were married. My grandmother moved from the distant town of Del Valle (just past the Austin airport) to join her new husband on a farm 10 miles closer to Austin but still outside the city limits.

She had never had a telephone before, which is why I suspect she held on to this book. I felt compelled to leaf through it and find out more about my city. At the time, Austin’s population was around 85,000. Not a lot of those 85,000 had phones. It’s a pretty thin book.

The long distance rates are posted on the inside front cover. 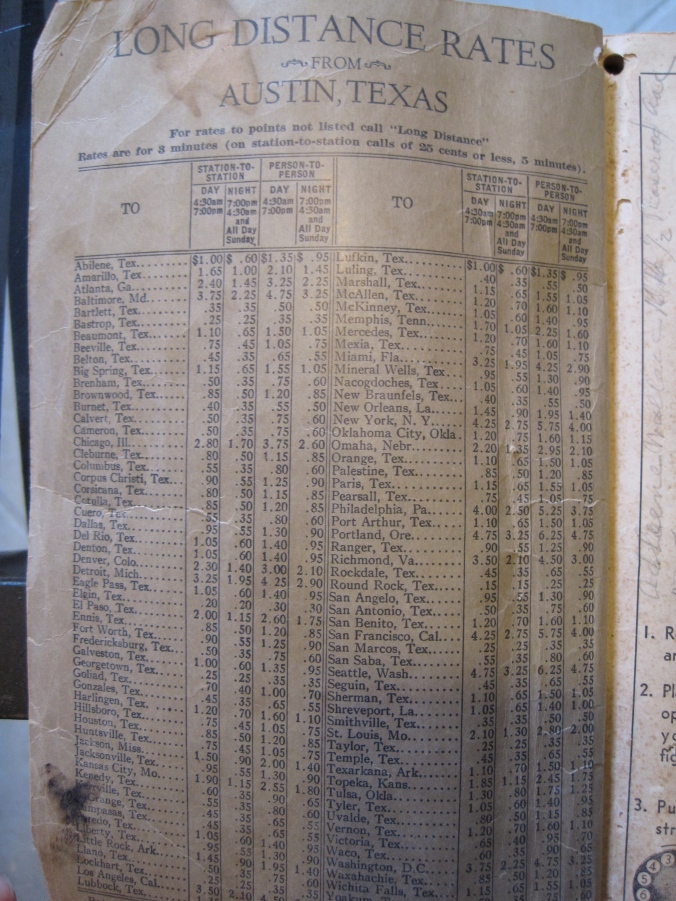 I love how “nights and weekends” isn’t a new concept. 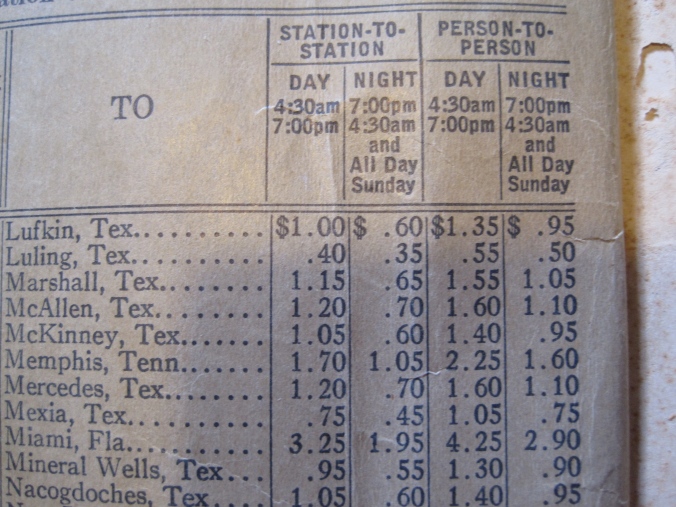 I looked for the most expensive option, and that turned out to be Seattle.

These prices are for 3 minutes. I found an inflation calculator, and that $6.25 in 1939 dollars works out to $96.41, or roughly $32 a minute! No wonder people freaked out and stopped everything when someone called Long Distance. And remember, this was during the Depression. People like my granddaddy didn’t have much cash during the Depression. He worked in the dairy business and bartered a lot of his milk.

With calls this expensive, you needed a hard sell. And nothing sells like fear. 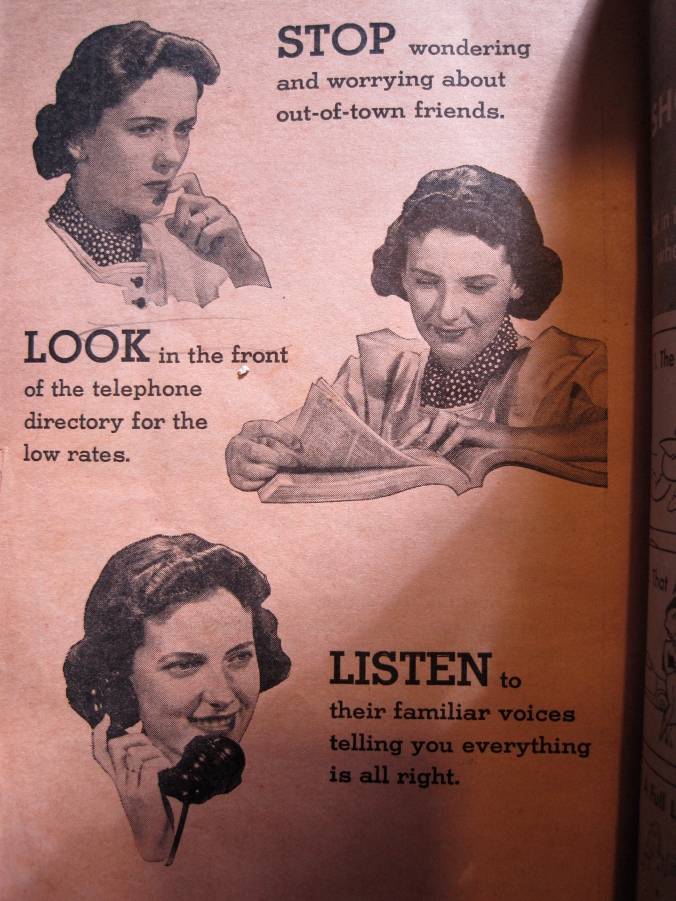 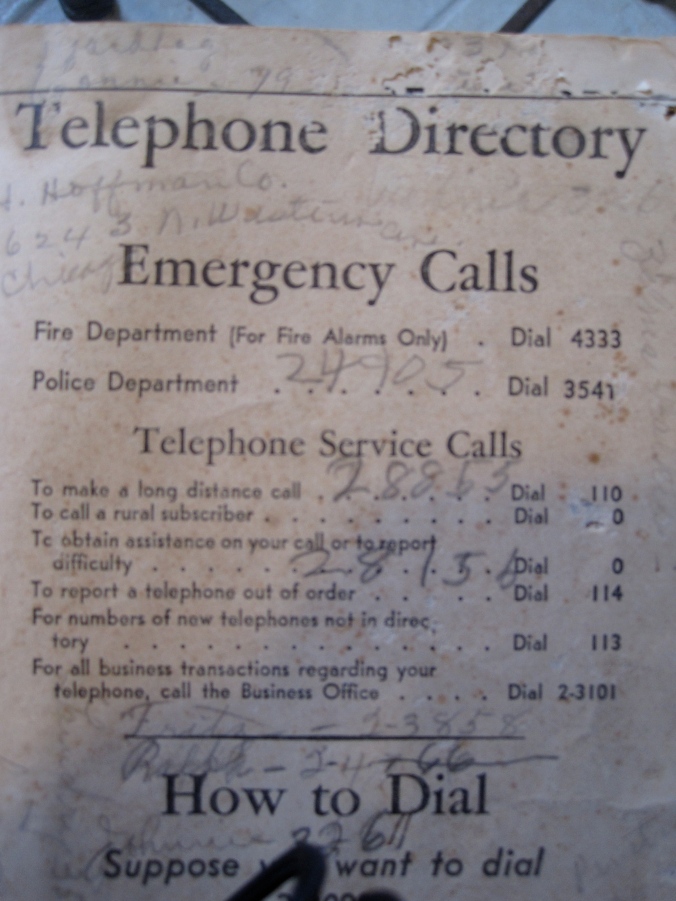 This was a time when using the rotary dial was new. Before, you just connected directly with an operator and told her (always her!) who to call. 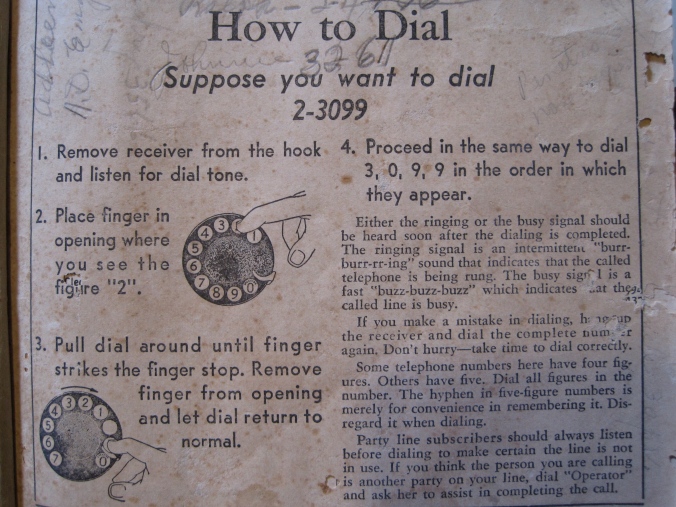 Now you need these instructions to tell a kid how to use the old-fashioned phone.

It was a time when Austin had only two high schools. Allan High was a junior high.

Austin High started in the Allan High location. During Thanksgiving break of my granddaddy’s junior year, the city moved Austin High to the Rio Grande campus and left the “junior high” students at Allan. Allan High later became First Baptist Church and after Austin High moved yet again in 1975, its Rio Grande campus became part of Austin Community College. I went to preschool at First Baptist, high school at Austin High, and did some college classes at ACC Rio Grande, so I got to attend school in all three locations!

The Rio Grande campus used to have these tube slides for fire escapes on the outside of it. My grandmother told me that she loved fire drills, when she could slide down, her dress flapping the whole way! I can’t find a picture of the building with the slides, so instead here’s a picture of Austin High’s mascot, Mr. Maroo:

Moving on. I saw a bunch of ads for re-making your mattress. I don’t know if they were converting them from being stuffed with cotton or corn shucks or what, but this just seemed kind of weird. 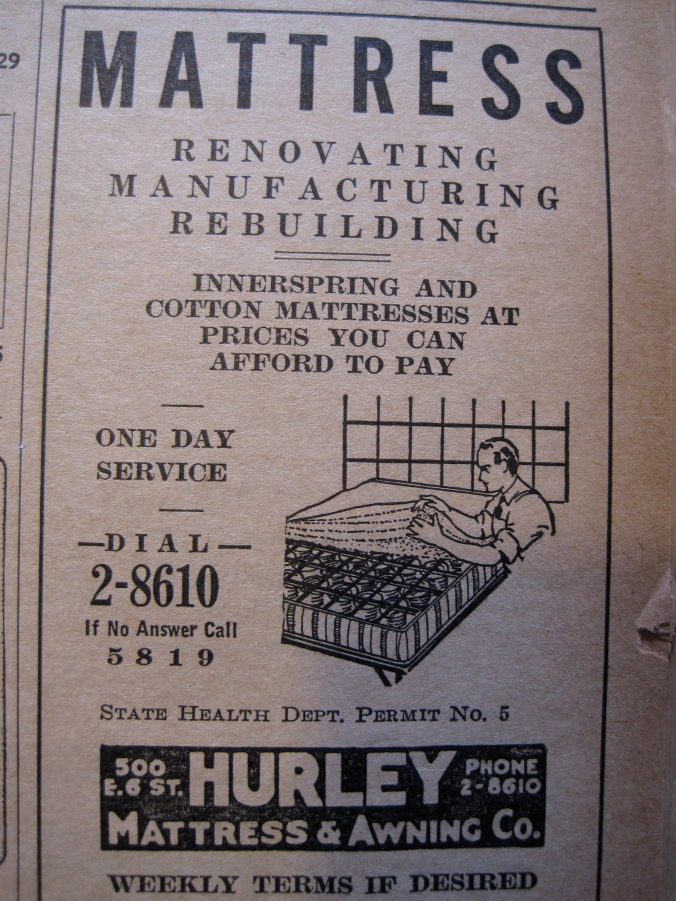 Check out the listings for doctors: they have their residential phone numbers beneath. Can you imagine that today?

Speaking of doctors, 7-Up is good for hospital use?! 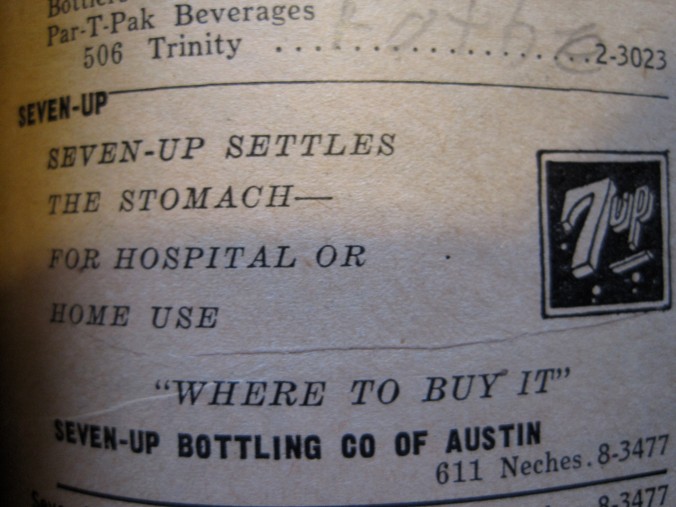 Feel like getting your hair done after that refreshing drink that kept you out of the hospital? You can either pick the air-conditioned location or the one near the university. Not both.

They had Turkish baths in town back then. One of these days I’ll get around to telling you about my Turkish bath experience in Arkansas.

The Driskill Hotel is still around, by the way. Some of its rooms are supposedly haunted. It is a very cool joint. And not because of the haunting part, either.

I like how this bank felt the need to detail how much money it has on deposit: 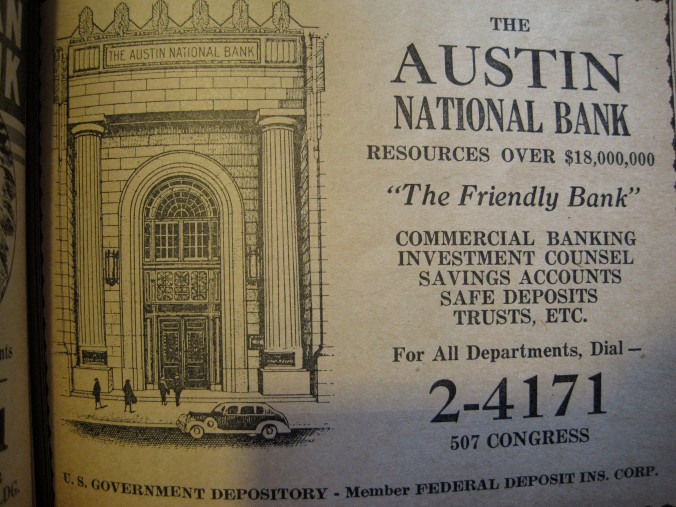 I see the FDIC was already in place. Nobody wanted to see a repeat of 1929. In case you’re wondering, that $18 million translates to roughly $277 million today.

I was leafing through the phone book all happy-go-lucky until I saw these taxi ads: 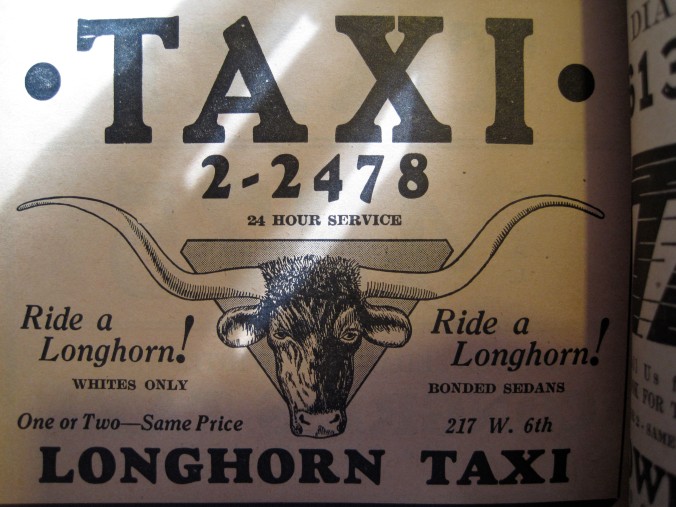 I teared up when I saw these. I like to fool myself that this kind of crap only went on in Alabama or Mississippi, but the truth is that Jim Crow reared his ugly head in my beloved hometown. I hate this part of our history.

I was reminded of my favorite Omar poem:

The moving finger writes, and having writ
moves on. Nor all thy piety nor wit
can lure it back to cancel half a line,
nor all thy tears wash out a word of it.

I can’t change the past. The best I can do is work for a better present and future.

Roy’s Taxi was the first in town to offer service to non-whites. 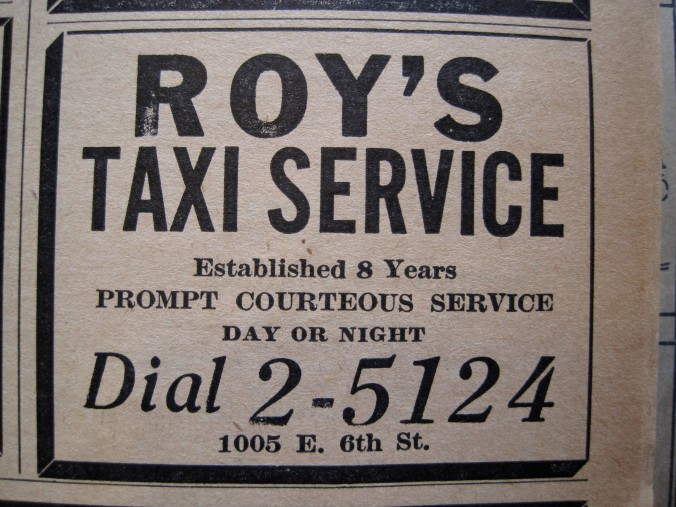 Of all the taxi companies listed in the 1939 phone book, only Roy’s is still in business.