God, that was fun.

I couldn’t have asked for a better Saturday. It started when The Big M took the Boy garage sale-ing. For $6 they picked up a really cool record collection from the 1940’s put in the World War II-era version of a CD storage case. 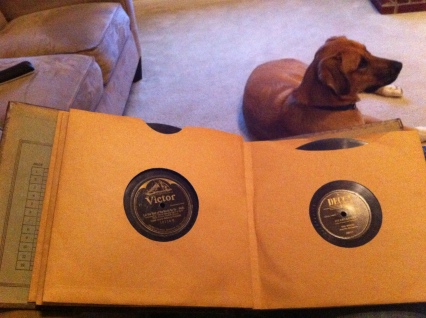 How cool is this thing? Oh, and hello, Joanie.

Then our college friends Bill and Sylvia came to spend the day with us. We got to catch up, our kids got to play together, we got to eat steak (that’s a later post), our kids played some more, the grown-ups played some dominoes, and we watched some NCAA basketball.

I’ve had an unbelievable run in my NCAA bracket and went 8-0 in the Sweet Sixteen games. At the beginning of today I had a 1 in 128 chance of winning $10,000 in the Yahoo bracket tournament (assuming 50-50 odds on each game). After Louisville took down Florida in a near-heart-attack-inducing game, my chances rose to 1 in 64, and my bracket vaulted to #2 overall out of Yahoo’s 3,170,905 brackets. 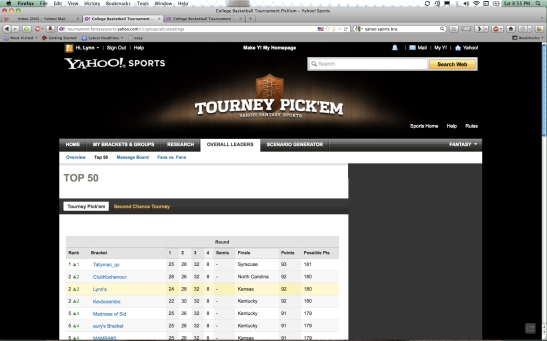 That is crazy. Just crazy.

College basketball hasn’t been this exciting for me in a long time, and we all got into it. After halftime in the Syracuse-Ohio State game we broke up the domino game to sit in the living room rooting for Syracuse, who I had picked to make it to the Final Four. It was an exciting game, but Syracuse couldn’t pull out the victory.

I had said that I would throw a party if my bracket came down to the final game. It turns out that today my bracket did come down to its final game, and I got to have a great party with great friends.