The Truth About Santa Claus

My kids wrote their letters to Santa weeks ago. For my six-year-old, it was a simple matter of sitting in front of the TV for half an hour and writing down the items that appeared in the commercials. This she did in checklist form: 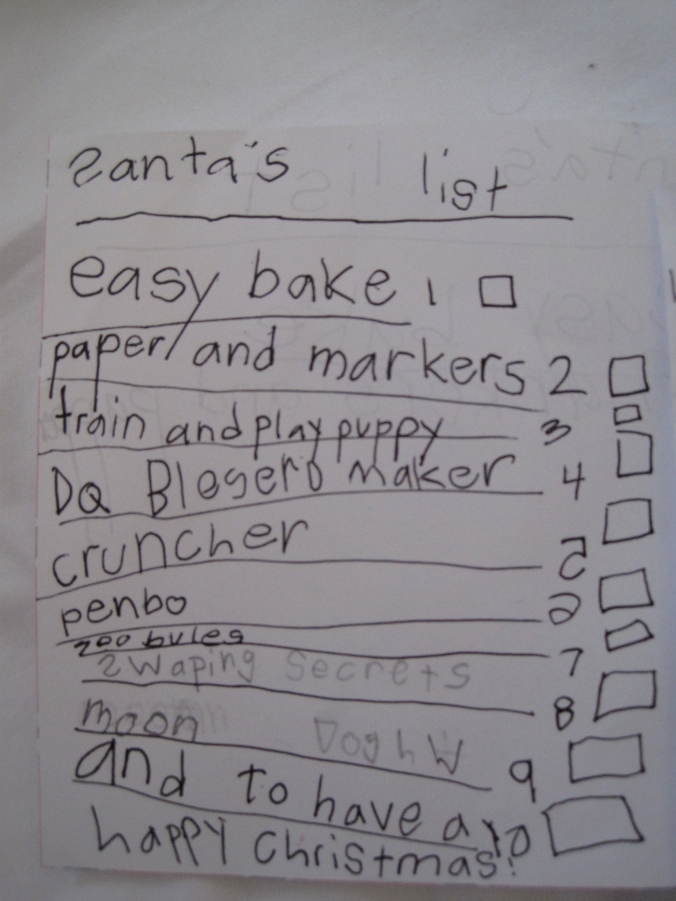 Then she wrote the letter itself: 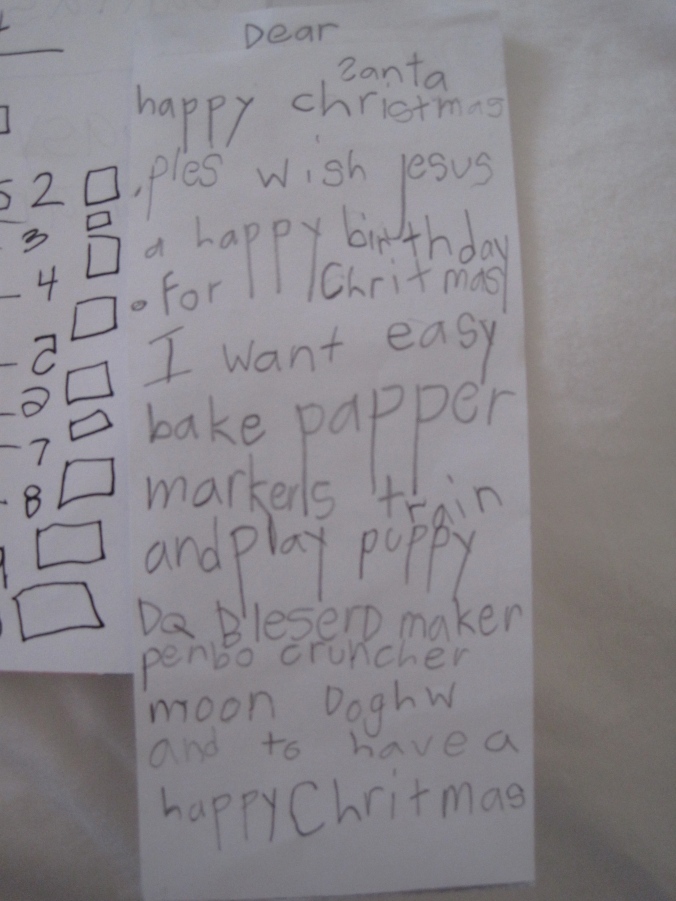 A couple of weeks ago she came home from school and said, “Mama, Anushka says there’s no such thing as Santa Claus. She says it’s the parents.” She looked at me expectantly for a moment, and then continued. “But I told her that it couldn’t be the parents because they would never buy all that stuff.”

How I laughed! I remember being a little child and thinking that it was a good thing I had Santa Claus, because my skinflint parents never got me more than one present at Christmas.

Her question got the wheels turning in my head. How does a parent deal with the loss of childhood magic?

That evening I had a girls’ night with some friends and posed the question of Santa Claus to them. It was a little bit of an odd question to ask because of the three of them, only one has a Santa Claus tradition. The other two are Jewish and Muslim, respectively.

The question turned into a really fun conversation. My Jewish friend said that she has told her girls “on pain of death” not to reveal anything about Santa Claus to their schoolmates. She said that she thinks Santa is a really fun tradition, and she herself loves the tooth fairy. “I believe in the tooth fairy whether my girls do or not!” And that’s a good way of looking at it, I think. I believe in Santa whether my kids do or not. Bless you, Natalie, for believing!

My Muslim friend said that when she was raised in Kuwait, she had an upstairs neighbor who was Christian. Every year he would dress up as Santa Claus and bring her a little gift. For years she believed in Santa Claus! They called him “Baba Noel”, which means Father Christmas. In Islam, Eid is the celebration following Ramadan, the month of fasting. My friend liked the idea of Santa so much that she invented “Baba Eid” to bring presents to her son after Ramadan. Isn’t that fun? She says her son believes there’s no such thing as “Baba Eid”, but she doesn’t care. Bless you, Mona, for believing!

My third friend homeschools, and so far her boys haven’t questioned the existence of Santa Claus. I suspect that when they do, Santa will still come to her house. Bless you, Deborah, for believing!

I’m very excited that the magic will be in our house this year. Two more days!